Installing a new instance of SQL Server is a common task for DBAs and most of us take a GUI-based approach that is easy and self-explanatory. However, there are some configuration options, both while installing and immediately afterwards, that DBAs can do to improve the functioning of SQL Server. This blog post aims to highlight those options and their benefits.

SQL Server’s ability to perform ‘Instant file initialization’ will result in significant time saving when new databases with large initial file sizes are created, or when databases are restored from backups. In short, this permission allows SQL Server to skip the normal process of ‘zeroing out’ disk space, before a new data file is provisioned, thus making it quicker. This is especially helpful when VLDBs need restored either normally or during a disaster recovery (DR) process

The option is now available to be configured during installation and one must simply check the box against it as shown below:

TempDB is a critical system database in SQL Server. Its usage goes beyond hosting user defined temp tables. TempDB is used internally by SQL Server for such purposes as hosting hash tables (intermediate tables in joins), tables variables, table valued functions, for index creation, sorts etc., While this is all mostly transparent for user processes, a poorly configured or sized TempDB can result in sub optimal functioning of the database engine and can potentially cause problems.

During installation there’s an option available to configure the number of files in TempDB, their initial size and their growth factor. To start with, Microsoft recommends that the number of TempDB files be equal to the number of logical processors or eight (8), whichever is lower.

The files can also be sized appropriately during installation itself to get an optimal start to TempDB usage, as the image below shows. Here, the number of files is configured to be 8, equal to the number of logical processors and with an initial file size of 1 GB with a growth factor of 512 MB. If the disk configuration allows for it, the initial size can be much larger too, thus reducing the need for file growth.

Another simple but elegant configuration is to designate folders for data and log files, named appropriately. This avoids the multiple layers that SQL Server designated these folders, by default, thus making it simpler and easier to group data and log files. In the image above, the E, F drives were designated for data and logs respectively. The ‘SQL Data’ and ‘SQL Logs’ folders were created ahead of time.

The recommended practice is to allocate all but 80% of server memory to SQL Server. This can, however change significantly, depending on the total available memory. But, for this example, we assume 80% as the initial allocation.

A simple trick to calculate this is 0.8*(total server memory in GB)*1024 = Number that is put in Max Memory. 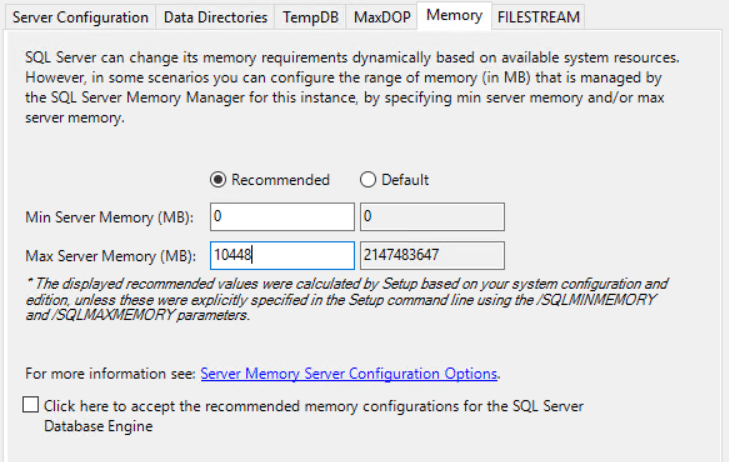 The 80% standard recommendation is to allow for less memory contention and paging by allocating at least 20% of the available memory to OS, which is mostly sufficient for normal operations.

There are many server settings that control SQL Server’s functioning. Things from number of parallel processors to use, to controlling access through xp_cmdshell are features that can be set using the sp_configure command using T-SQL.

MAXDOP, Max Server Memory, Min Server Memory are some features that DBAs configure this way. Two of the other most common settings that generally applies to most servers are ‘Backup Compression’ and ‘Optimize for ad hoc workloads.’

Backup compression is a very useful feature that saves disk space by compressing backup files. This can be controlled via maintenance plans and individual backup T-SQL commands, but is optimal to enable them at the server level so no large files are created on the disk, in such situations as running ad hoc backups.

The optimize for ad hoc workloads setting allows SQL Server to reduce memory usage by query plans that are not reused. Only plans of queries that are rerun, get full space in memory.

Using the T-SQL below, these can be enabled:

Deadlocks are resolved internally by SQL Server based on the cost associated with the queries involved in deadlocks. In many cases, applications and user processes are built to handle deadlocks well, without affecting data quality, yet, there may be times when deadlocks might repeat and warrant a more detailed analysis. Deadlock trace flags, when enabled, ensure that the details of the deadlock are captured in the error log for later analysis.

Trace flags 1204 and 1222 capture the deadlock node and query details. These trace flags can be enabled using the T-SQL command DBCC TRACEON, but a better way to have them enabled, and more importantly, remain enabled after a server restart is to add them to the startup parameters of SQL Server.

This can be done by accessing the startup parameters section and specifying the trace flags as shown below, from SQL Server configuration manager: As mentioned at the beginning of this blog, these are some of the configuration and set up items that align with general best practices of SQL Server setup. Often there are other items that need to be configured to comply with company standards or specific application or user requirements. Examples of such would be Database Mail, TLS encryption of database connections, SNAPSHOT ISOLATION, MAXDOP, etc.

It’s good practice to build a standard build document that incorporate all the above steps, so all installations of SQL Server instances across the company are uniform and meet all requirements.

Datavail DBAs install and configure SQL Server instances as per the industry best practices, which are refreshed as newer versions come out, and based on our very own experiences and testing processes. At the same time, we also adapt to established standards, if our customers have them, while enhancing those with better methods, wherever needed, so the SQL Server is installed and configured in a manner for optimal usage.

A standard Datavail installation includes all the above steps, along with monitoring the server 24x7x365 using our proprietary database monitoring tool, Datavail Delta, that comes included with our services. Additionally, as part of our standard operating procedure, SQL Server patches are applied regularly, audits such as backup, security, hardware resource utilization etc., are done at periodic intervals, and queries are optimized, in an effort to keep the server as optimized as it can be, both on-premises and in the cloud. If you’re looking for SQL Server support for your organization, contact us to learn more. Find all of our SQL Server resources here. Sen Subramaniam is a Senior SQL Server Database Administrator at Datavail with experience in working with multiple clients spanning a variety of domains for more than 10 years. He has extensive experience in SQL Server installation, configuration, and migration. He is a SQL Server MCITP and AWS Certified Solutions Architect Associate. His areas of interest include performance tuning, planning, implementation, and testing of disaster recovery solutions. His latest interests include planning for hosting SQL Server in the Azure and AWS cloud platforms. He lives in the Denver area and his hobbies are traveling, hiking in the Rockies, playing badminton, and learning the violin.